Our average calculator can calculate the average for the given data set in no time at all. You just have to insert the value in the given input box and press the “Calculate” button. It will instantly provide the average value, sum value, and average count (total number of items).

This average value calculator has two tabs. There is a reason behind the two-tab view. The first tab is named “Single Value” tab. It has a single input box where all the values can be entered separated by commas. It is necessary to separate the values by commas. Otherwise, it will not give you the best results. On the other hand, if you need to enter a separate value, then the “Multiple Input” tab will meet your requirements.

The multiple input tab has six input boxes by default, and more input boxes can be added by clicking on the “Add more fields” button. Users can add as many input boxes as needed to calculate the average of his/her data set. These added input boxes can also be deleted by using a tiny red button against each input box. Our average finder tool has the perfect accuracy and speed to meet the requirements of today’s fast paces working environment.

Average has several meanings in different contexts. In mathematics, it is a central value that represents a group of data to comprehend the overall value of the presented data. It is calculated by adding all the values of the given data and dividing the result of the sum by the total number of values in the data set. Let’s understand it by a simple example.

Suppose a student got 40 marks in Physic, 50 in Mathematics, 55 in Chemistry, and 60 in English. All of the courses consist of 100 marks per course. What will be the average marks of the student?

To compute the average marks of the student, first, we have to add all the marks obtained.

The mean, which is also known as the arithmetic mean, is the central value, which is estimated to evaluate the central value of a given set of data. This mathematical measurement is the most commonly used average and is usually called mean in daily life.

The sum of all the values in a data set is computed to calculate the arithmetic mean. The sum of the values then divided by the total number of values in the data.

The arithmetic mean should be used if a data set includes values that are not extremely high or low and are reasonably equally spread.

The formula for the mean

Although the mathematical formula is not relevant for calculating the mean, it may be useful to know the basic formula to calculate the arithmetic mean. The arithmetic mean can be calculated by using the formula below. 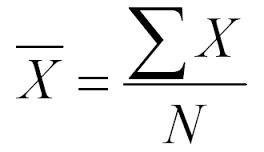 Median is another type of average that is most commonly used after arithmetic mean. It is the middle value in a sorted data set. Values are sorted in higher to lower order or in lower to higher order to calculate the median. Median varies according to the total number of values in the data set.

If the total number of values in given data is even, for example, {2, 4, 6, 8 10}, we will calculate the median by excluding a value from each side of the data set. The remaining value will be median, which is 6 in this data set is.

The mode is a type of average that is calculated based on the frequency of the values. A value is considered as a mode in a data set if it occurs more often than any other value. In simple words, a mode is the most repeated value in a given data set.

The average is used in every field of life frequently. It is used by students, teachers, shopkeepers, business people, engineers in their daily routine. It would not be wrong that almost every person uses average in their life at some stage.

You may hear on a news channel that people spend an average of 12 hours of their time per day on their mobile phones. It does not mean that every single person is spending 12 hours on a mobile phone.

This average may be calculated based on a data set collected from specific areas and people to get an idea of how many hours people spend on their phones. Some may use their phone for 4 hours, some for six, or some for 15 hours.

The data is always varying when calculating the average, but it gives us a general overview of the usage of mobile phones by users. This example is very simple, and in the same way, the average is used to summarize big numbers and data into a single number.