Positioning and power of each number

In a decimal number, each digit has a significance level. The digit which has the highest level of significance is called MSB while the other with the lowest level is called LSB. If there is no digit after the decimal, the minimum bit value would be 0 and nothing will be in negative.

The number 358 will be given as

From the above example, it is obvious that the value of LSB is 0

However, the number 356.8 will have a negative LSB

The breakdown of 356.8 shows that the value of LSB is negative 1

Numbers in decimal form can be converted to various systems including binary, octal and hexadecimal

To understand the conversion better, let us consider a decimal number for conversion. Suppose that 245 has to be converted to the binary form. The binary number system has base 2 as it comprises of two values only (0 and 1).

When 245 is divided by 2, it gives the following result

Quotient of 122 and remainder of 1, repeat the process till you reach the end. We would have the following results.

Quotient of 1 and remainder of 1.

Once you are done with the division process, compile the remainders starting from the end. Thus, the decimal value of 122 will have the following binary value. 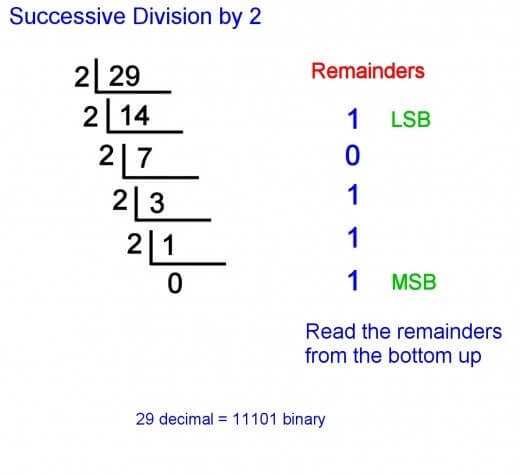 The octal system has base 8 because it comprises of eight values. Here is how you need to perform the conversion process.

Suppose that the number 422 in decimal format has to be converted to octal. The following steps will be performed for conversion.

Divide 422 by 8 until the remainder is less than eight. Hence, we would get the following interpretations. Record the quotient and remainder for each step of division.

As the remainder is less than 8, the process will end here. Now, compile the remainders starting from the end. The number 422 in decimal form will have the following octal value.

The hexadecimal number system has base 16 as it includes a total of sixteen values. Suppose that you need to convert 250 in decimal to the hexadecimal format. Here are the steps.

Divide the number by 16 until the remainder is no more divisible.

The process will stop when the quotient is 0. Hence, after inserting appropriate hexadecimal values, we have

If a number is in decimal form, it has to be converted to fractions for adding, subtracting, dividing or multiplying

Consider that we have the numbers 6.25 and 5.68 and they have to be added together. Here are the standard steps for performing this operation without using a calculator.

The two numbers are 6.25 and 5.68. As both of them have two digits after the decimal, the denominator will be 100. Hence, we would have the following fractions.

Both the numbers have 100 as the denominator so no LCM is needed.

When we add the two fractions written above, the following result will be obtained

Apart from addition, the other mathematical operations can also be performed in a similar manner. For instance, the same numbers will be multiplied by performing the following steps.

Convert both the numbers to decimal fractions.