There are multiple number systems with Octal and Decimal being two of them. Octal has base 8 and has values from 0 to 7. Similarly, the decimal system has base 10. The following video gives an insight of the conversion procedure.

The division method is a common one used for the decimal to octal  conversion. Here are the steps involved

1.    The decimal number and breakdown into powers of 8

Suppose that the number 84 in decimal format needs to be converted to the octal form. It would be written as

The above table shows the powers of 8 in the left column and equivalent decimal values in the right column. We will only select the first three rows the decimal values are less than 84. The fourth row shows a decimal value of 512 so it will be ignored which is why it has been written in strike text

From the above step, we have the following extractions

Now, let us proceed to the stage of division. Here, we need to divide the initial number (84) by the maximum decimal value from the powers of 8 (in this case 64). This step is used to determine the number of octals present in a given decimal number. Here, we have to take all the powers of 8 which have an output lesser than the actual decimal digit. Thus, the first three which have a maximum value of 64 are taken into consideration.

84 / 64 gives a quotient of 1 and a remainder of 20. Let us reuse the outputs produced again and add this result.

From the above step, when 84 is divided by 64, we get a quotient of 1 and a reminder sum of 20. Now, moving on, the remainder with each division step will be divided by a smaller power of 8. This process will be repeated until there is no remainder left.

In the first step, 84 was divided by 64 which is 82 (eight raised to the power 2). Now, we would use one smaller power of 8. Thus, in mathematical terms we have. 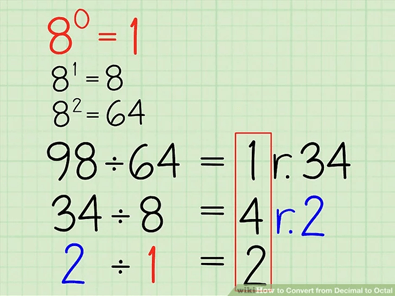 Divide the remainder 4 by 80

4 / 1 gives a quotient of 4 and remainder of zero. This means that 4 is perfectly divisible by 1.

5.    Pick all the quotients to get the converted form

If you have a good look at the extractions from step 4, we have performed three steps of division before reaching the remainder of 0. Each of these steps has a quotient.

Now, write all the quotients together from the beginning to the end. Hence we will get the following converted form in octal.

Even the best mathematicians make mistakes so checking the results is important. Here is how you can attain a confirmation.

The decimal value we started with was 84 and the converted octal number is 124. Now, let us perform the opposite of what we did in the division process. At that time, we divided the remainder with the corresponding power of 8. To check results, we will use multiplication.

Now, let us add all the results 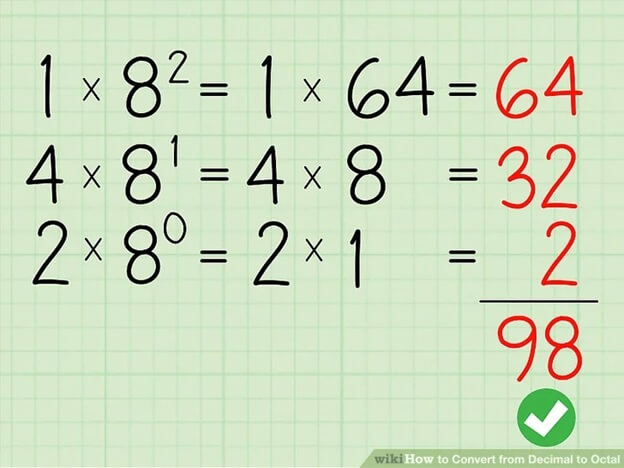